Searching for expert consensus on COVID 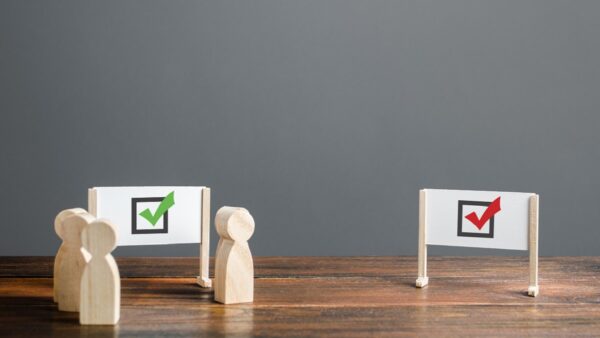 The start of the new year has seen a flurry of discussion on what we should expect from the pandemic over the next 12 months. But while some aspects of our COVID roadmap seem to be broadly agreed upon by experts, others look to be decidedly shaky. Are we really moving towards endemicity, or could we be stuck with a pandemic forever? Could it all be over in months, or are we looking at years of restrictions to come?

The problem is potentially one of communication, rather than science.

The science of pandemics is intricate and incorporates expertise across a range of fields. Every expert is approaching this complex beast from their specialist angle, and even basic words and concepts are not uniformly defined. We’re not all speaking the same language – and until we are, confusion will reign.

Cosmos reached out to three experts in virology and epidemiology to address some of the key uncertainties that have emerged in recent weeks, asking them to lay the science on the table. Here’s what they had to say.

Are we headed for an endemic phase of the virus, or will it be pandemic forever? What do these terms really mean?

An almost tangible sense of relief has swept the nation in the early days of 2022, as experts have begun discussing the transition to an endemic phase of the virus. For many, this seems the light at the end of our years’-long tunnel – we know there’s still a way to go, but endemicity suggests an endpoint and a return to “normal”.

However, some experts have voiced an opinion that COVID may never reach endemicity, and instead could retain pandemic characteristics indefinitely. Is there a chance we could be stuck in this holding pattern, indefinitely beating back a relentless pathogen? Is there really a divided opinion on this crucial question?

The broad consensus is, thankfully, no.

Instead, the apparent division largely stems from a discrepancy between the lay and technical usage of the term ‘endemic’.

In common usage, endemism refers to the time when the threat of the virus has ebbed to be on par with the common cold, or perhaps the flu. It represents a tipping point after which our collective immunity is sufficient to keep severe disease largely at bay.

The technical definition is quite different, referring to a very specific point at which we reach immune equilibrium: the immunity lost in a population, through natural waning or the emergence of novel variants, is balanced by the immunity gained through vaccination and infection. It’s an important marker for epidemiologists, because a pathogen’s impact becomes significantly more predictable at this point.

It’s highly likely that SARS-CoV-2 will always show patterns that technically align with the definition of a pandemic disease, finding under-vaccinated populations in which to rapidly spread before waning. It is this technical definition that has prompted some experts to say that SARS-CoV-2 could be pandemic indefinitely.

But the trajectory of COVID into the future still suggests we are moving towards the lay definition of endemicity.

“I think it’s possibly splitting hairs a bit,” says Professor Ivo Mueller, epidemiologist and Joint Head of the Population Health and Immunity Division at the Walter and Eliza Hall Institute of Medical Research.

COVID may well continue to throw new pandemic waves of infection at us – but so do other viruses that we don’t view as a crippling threat.

“Only very occasionally (like in 1917), we get a very, very bad pandemic flu which then has the potential to really knock the world about dramatically.”

This means that our lay concept of endemicity is almost inevitable, even if the technical criteria are not met.

Whether or not we’ll make great strides towards this goal in 2022 is less clear. We may need to buckle ourselves in for several more years of bumpy road yet.

“We are going to see this virus present at higher levels than we would normally expect from other coronaviruses (like the common cold) for at least four or five years, is what I would suspect from a molecular biology standpoint,” says Professor Nigel McMillan, program director of Infectious Diseases and Immunology at the Menzies Health Institute.

“But after that time, with consistent vaccination, my view is that it will be a bit like flu. It’ll be around all the time and we’ll cover it with yearly or two yearly or three yearly vaccinations.”

A question of timing

There has been some reporting that thanks to the rapid spread of Omicron, we could burn through our current wave and reach endemism within months, not years. Why such discrepancy in timeframes?

Again, the confusion has likely arisen through communication rather than science.

The trajectory of the Omicron variant may well show a rapid peak before ebbing, but the pandemic as a whole doesn’t end with Omicron. We will still have a way to go before we reach endemism.

“If we look at all the variants – like Alpha – you can see that they tend to burn brightly and then go down again, and then we get another variant coming along. Omicron will behave in the same way. This variant will certainly burn its way through the population and will go down to low level. But that doesn’t mean the virus won’t still be there.”

Making our way to the other side of the Omicron wave will likely buy us some breathing space, but it won’t represent the end of the pandemic. We will still need to address the significant hurdle of achieving high levels of global – rather than national – immunity through vaccine equity before we can consider endemism a possibility.

If Omicron is milder than Delta, does it represent an opportunity to build our natural immunity? Is it OK to let it freely circulate?

The messaging around the Omicron variant over the past several weeks has consistently stressed that it is ‘milder’ than its immediate predecessor, Delta. Although this has been couched in warnings about the persistent threat posed by its extraordinary transmissibility, the term ‘mild’ seems to have struck a chord with some. There have been reports of ‘pox parties’, at which healthy people attempt to contract the virus in order to build their immunity ahead of the emergence of future, potentially deadlier, variants.

While ballooning hospitalisation rates should be enough to convince most that the Omicron variant still represents a significant health risk, McMillan believes we need to also address the underlying assumption that natural immunity is superior to vaccine-induced immunity.

“It’s a false hope in a sense,” he says, “because we know that natural immunity goes away over a period of six months to a year. The idea that you get naturally infected and then you’ll be protected forever is wrong.”

He points to studies showing that antibodies wane at approximately the same rate between vaccination and natural immunity, but further stresses that antibodies are only one part of a broader immune response. While we don’t have enough data yet to fully understand the complexities of the full immune response to SARS-CoV-2, McMillan says that there is evidence to suggest that vaccination may offer a five-fold increase in protection against reinfection over natural immunity.

“I think this can be confusing for the public, because we’re really talking about the subtleties of immunology,” he says.

He reiterates that there is now substantial immunologic evidence and a growing body of epidemiologic evidence to indicate that getting vaccinated or boosted after being naturally infected significantly enhances your overall protection, and advice remains clear across the board: get yourself vaccinated and boosted as soon as you can.

In many countries, including Australia, containing Omicron is no longer an option, and the likelihood of exposure increases rapidly with each passing day.

“I would argue that it is not possible to close transmission down,” says Professor Catherine Bennett, Chair in Epidemiology at the Institute for Health Transformation.

“We might slow it, but with Omicron I think we have to accept it can’t be stopped.”

The situation is not without its upsides. Widespread repeat exposures, coupled with increasing vaccination rates and continued diligence with mask wearing and social distancing, will take us at least part of the way closer to endemicity.

But conversely, Bennett warns, there is another hidden threat lurking behind the Omicron surge.

“The risk is that a high volume of infections in both northern and southern hemispheres not only impacts health care and economies as societies try to manage high infection rates, but also speeds up the mutation clock and the likelihood of seeing new variants of concern before this wave is over.”

Will new variants continue to be milder?

Many people have taken the emergence of Omicron as a sign that SARS-CoV-2 will follow a pattern of decreasing severity known as the ‘law of declining virulence’, first proposed by the bacteriologist Theobald Smith in the late 19th century.

This, unfortunately, is not widely supported by the science, with newer models of pathogen transmission indicating that increasing virulence is not necessarily detrimental to all viruses.

But take heart – we are indeed likely to observe decreasing severity in new variants, but it will be thanks to our increasing immune capabilities, rather than an innate property of viral evolution.

“With every new variant we are learning more about the virus and the scope of mutations,” says Bennett.

“As time goes on, there will be fewer surprises, we will be less likely to see brand-new mutations, just different configurations of mutations in new variants – for example whilst Omicron has unique mutations, it also shares mutations with Alpha, Beta, Gamma and Delta. Over time, the overlap between variant should make it less likely that we will see immune-escape variants, which in turn will keep transmission and disease severity in check.”

This trajectory appears to be largely agreed upon by experts – although some feel we have not sufficiently communicated to the public that the decline of this virus could still hold some surprises.

“I think people have to understand that that is not necessarily going to be a linear process,” says Mueller.

Although it may sometimes seem the field is divided, when we strip away the subtleties of technical language, there is, for the most part, broad consensus amongst the scientific community on the general trajectory of the virus. Clear, honest discussion by experts with each other – and with the public – is a key part of scientific research – and our method of dealing with this pandemic.

“I think there are different lenses even within disciplines, and certainly across fields,” says Bennett.

“I trained in epidemiology, population genetics and microbiology. Other epidemiologists come to the field with different backgrounds and different specialisations, and that’s what makes these conversations so important.

“There are no correct answers to hypothetical questions, but they all get us thinking about all possibilities, and knowing which signs to look for that might indicate the true path this pandemic is taking.”

Hoping to rent a car this summer? Good luck

When we think of extraterrestrial life we tend to...

While most robotic systems currently rely on optical light...

When we think of extraterrestrial life we tend to...

While most robotic systems currently rely on optical light...