How a tiny beetle packs power into its flight 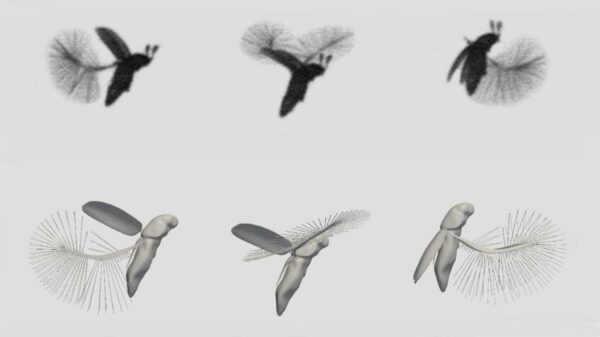 Featherwing beetles (from the family Ptiliidae) are the smallest beetles known to exist, some less than a millimetre in length. But these plucky bugs pack a powerful punch: they can fly at extraordinary speeds for their diminutive size, keeping pace with relatives three times as large.

Now, an international team of researchers has identified the mechanism that allows this aerodynamic quirk to occur, as described in a new study in Nature. The study, which describes a previously unknown method of flight, has implications for how we understand miniaturisation, the evolutionary process by which creatures become smaller over time. And it could ultimately inform the creation of miniscule flying devices.

Featherwings are so called because they have peculiar bristled wings. And it turns out it’s these bristled wings, which have a much smaller mass than membranous wings of the same size, that allow for such efficient flight.

The new study combined morphological methods with three-dimensional reconstructions of the movement of the critters’ body parts in-flight, and applied computational aerodynamics to understand how the featherwing moves through the air.

The beetles were captured in Vietnam, placed in a transparent chamber, and had their flight filmed on two high-speed video cameras. From this footage, the team was able to create three-dimensional reconstructions of the beetles in flight.

The researchers found that those nifty bristled wings help the beetles to fly in a number of distinct ways. First, they’re extremely light, composed of slender bristles rather than a flat surface-membrane. And in the smallest of these tiny beetles, the team found that these bristles are covered with outgrowths, creating a brush-like effect; these wings are even lighter, and puncture the air.

Surprisingly, the team also discovered a new flight style unique to these beetles. Like other flying beetles, miniscule Ptiliidae such as Paratuposa placentis use their hindwings for flight, but unlike other beetles these hindwings move in a broad figure eight, making rowing movements that clap alternately above and below the body.

The team now hopes to turn their attention to other miniature flying insects. Because the miniaturisation of various insects has occurred independently, they anticipate they’ll learn all sorts of new aerodynamic quirks.

And the research has implications beyond a passion for understanding how insects work; the principles of insect flight are already used to design experimental, unmanned aerial microvehicles. The researchers believe that one day the subtleties of miniature flight might help inform the creation of microscopic flying devices.

“To study miniature insect aerodynamics, we relied on specialised computational techniques,” says study co-author Dmitry Kolomenskiy, from Skoltech, Russia. “We think it may prove useful for tackling a wide range of problems that call for multiscale modelling.”