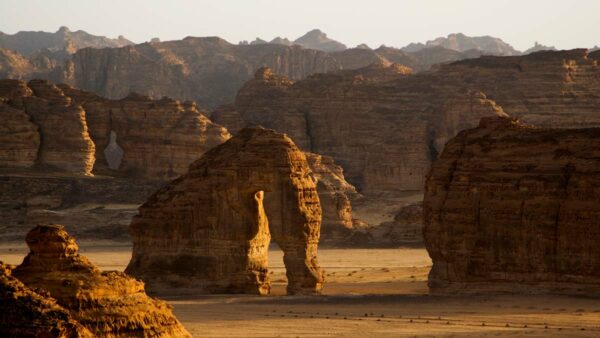 A team of archaeologists from the University of Western Australia has discovered a network of ancient super-highways – long-distance corridors linking oases and pastures – built by the Bronze-Age inhabitants of north-west Arabia.

“Funerary avenues were the major highway networks of their day, and show that the populations living in the Arabian Peninsula 4,500 years ago were far more socially and economically connected to one another than we previously thought,” says Matthew Dalton, lead author of the study and an archaeologist from UWA’s School of Humanities.

The research, published in the journal Holocene in December, involved taking satellite images of these avenues, which scar the countryside across an area of 160,000 square kilometres. The authors found more than 11,000 of the 17,800 “pendant” tombs found in the region were placed on these causeways, and that the highest concentration of funerary monuments on the avenues were located near permanent water sources.

Based on the locations and pathways of the ancient highways, the team think populations used them to travel long distances between major oases like Khaybar, Al-Ula and Tayma. Lesser avenues also trail into the surrounding landscapes, which the team thinks hints at herds of domestic animals being moved to nearby pastures with the swell and flow of seasons and drought.

“The sheer number of Bronze-Age tombs built around them suggests that populations had already begun to settle more permanently in these favourable locations at this time.”

Hugh Thomas, director of the project, says the study is part of a swathe of information revolutionising traditional understandings of Bronze-Age Arabia.

“The papers published in 2021 have helped demonstrate that in ancient times Al-Ula and Khaybar were characterised by a rich and dynamic occupational landscape,” Thomas says.

“The archaeological finds coming out of these regions have the potential to profoundly change our understanding of the early history of the Middle East.”

Previous articleOzone pollution responsible for billions in crop losses
Next articleRevealed: How a web of Canadian doctors are undermining the fight against COVID-19
Amalyah Hart